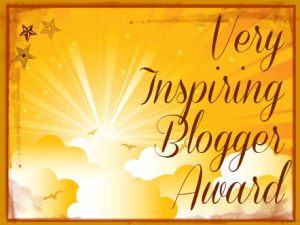 Blog awards to me feel utterly precious. I think of them as a way through which other bloggers use to tell fellow bloggers they like/appreciate their work. I’ve been nominated for a few awards previously and one would be tempted to think that once you get them you get used to it. I don’t know how others feel but personally, each nomination gives me that incredible feeling. Sometimes I just lack the words to describe it but in all it’s a very, very beautiful feeling.

I was nominated for the Very Inspiring Blogger Award by Kimberly Jo Cooley some days ago but couldn’t post about it yet as I was working on the Way of the Cross series. Her nomination touched a deep part in my soul. When I started this blog, my aim was-still is-to inspire anyone who stops by. Like I wrote on ‘why memoirs of aly’, I share my experiences because that way I’ll be able to connect with people who have gone through similar experiences and to enlighten others who haven’t because when all is said and done, life is too short to experience everything; but if one wills it, they can choose to learn from other people’s experiences.

Sometimes I post religious stuff even though I know not all my readers profess the Christian faith. One thing I’d like to put across though is that the main reason I do it is because I struggle with anxiety and faith gets me past those dark days. With the Way of the Cross for instance; the first time I said those prayers and actually reflected on them was last year. They opened my eyes to faith and I feel I couldn’t have found them at a better time because last year so much happened in my life and the strength I had derived from the prayers got me through it all.

Ergo, this year I decided to share the prayers, so people would reflect on them during this Lenten season, in the hope that they will offer great inspiration to all who read it like they did to me. My intention with this blog, as I’ve stated before, is to inspire, to motivate, and I share what I deem inspirational or something readers can reflect on.

Through Kimberly’s nomination, I feel I’m achieving my aim; and for that I’m immensely grateful. Thank you Kimberly! I also want to thank all my readers; all who spare some time to read my ramblings. Thank you all.

This award doesn’t come with rules but as it is, I’ve read many blogs which I feel are really inspiring. Basically, inspiration-according to the Oxford dictionary-is all about things/people who make one desire to be better/successful; things/people who give us ideas for something, especially something artistic or imaginative. And the thing about inspiration is that one can draw it from anything; it’s all about having an open mind. That said, below is my own list of inspiring nominees:

AB atperspectives on life, universe and anything

VicBriggs at shards of silence

There are no rules – for accepting this award. Just copy it and place it on your blog in a post or wherever you like… link back if you have time to do so.