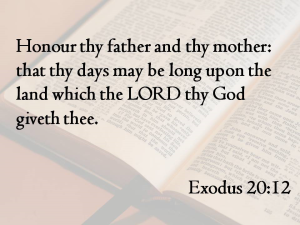 Back in the day, when God used to communicate with His people through prophets, He gave Moses the laws inscribed on stone, commonly known as the Ten Commandments. On the top of Mount Sinai, He came down on a cloud of smoke in fire and spoke in thunder as He gave the laws. In my own understanding, the commandments are subject to people’s varying interpretations and as a result, people decipher them differently.

The commandment I particularly want to delve into at this point is the fourth commandment: Respect your father and mother, so that you may live a long time in the land that I am giving you (Exodus 20:12). Notice He didn’t ask parents to respect their children? That’s how many people interpret it. But then, based on my own understanding, that brings me to another verse in the Bible: (Colossians 3: 21) Parents, do not irritate your children, or they will become discouraged.

That’s the thing about respect; it’s a two way thing. One can’t expect to disrespect someone and still expect that same person to respect them. As I’ve mentioned in some previous posts, I am not a mother yet, so most of my posts are written from a daughter’s perspective. Growing up, I had some dreadful moments where I just felt small; not by size, but because I felt my opinion on some issues wasn’t taken seriously. I often felt it was the, ‘I’m big, you’re small; I’m right you’re wrong’ patronizing attitude parents have towards their kids at times.

Maybe I’ll understand it when I get my own children, but until now I still don’t get it. In my opinion, everyone deserves respect. It doesn’t matter if it’s a homeless person, or a small baby. And being older doesn’t automatically mean one’s right. Sometimes parents feel like they’ve been around longer and for that they know how things work, but truth is sometimes children see things clearly, better than adults and for that they should also be heard. They may not always be right, but giving them a chance to share their opinion makes them feel valued and respected.

During one of my dark pubescent phases, I argued with my parents about everything; at some point I even contemplated running away from home, until a quick look into the future showed me I would screw up the rest of my life if I carried on with my plan. I decided that would be a foolish move so I scratched it. However, the misunderstandings didn’t stop there; they continued because the root cause hadn’t been addressed. It’s during that time that I suffered from some stress-related illnesses; depression and all.

At some point I got tired of all the fighting, and just decided to stop arguing, even if every part of me was itching to say something. I don’t feel my parents changed at all; they still look at things the same way they did back then. Sometimes I feel I grew up; that’s why I lost the urge to always fight back.

The other day my big sister was having a tête-à tête with dad. She asked him to look back and picture himself at the age she is now, and to remember how he wanted to be treated at the time. That, she told him, would help him know how to treat us. It would stop him from treating us like kids, just because he’s older than us.

When all’s said and done, I believe parents should also respect their children. Just because they’re younger than them doesn’t mean they’re indisputably wrong. And if a parent wants their child (ren) to respect them, the best thing would be to show them how; by respecting them back. Foster mutual parent-child (ren) respect because if it’s one-sided it won’t last long; it won’t be long before the child gets tired of always being the one to give.

Something I learnt when I was still a kid was that one doesn’t ask for respect, they earn it. It just happens that sometimes grown- ups do some shoddy things yet expect kids to still accord them the respect they deserve as adults. It doesn’t work like that. If parents or adults want children to respect them, they must carry themselves in a respectable manner.

However one chooses to look at it, God did ask children to respect their parents, but the same parents have a duty to help their kids live by that fourth commandment.