Is it just me or is everyone singing naked? And by everyone I mean a good majority of female artists. Last night I was watching this music show. When it started the first song that was played was Beyoncé’s partition, which is overtly sexualized. As in most of her recent releases, she was wearing well, close to nothing. 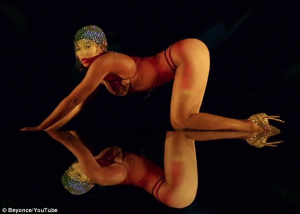 And as I watched the rest of the partition video I almost vindicated Miley. She’s a young woman. Still trying to discover who she really is and we’re in the ‘sex sells’ era. How will she not do what she’s doing, when everyone else seems to be doing the same, only that she has taken her provocative performance a notch higher?

Rihanna’s pour it up was played next. Scantily dressed and twerking, I understood why poor Miley seems to think only provocative moves will win her the numbers; gain fame. Who wouldn’t anyway? Sex is really selling. Coincidentally, Miley Cyrus’ collabo with Mike Will made it, Whizz Khalifa and Juicy J., 23 was next. In the video she’s in a red Chicago bulls’ bikini; and this is Miley we’re talking about so it’s kinda obvious what her performance entails: infamous foam finger, signature tongue move…

Lady Gaga’s applause succeeded Miley’s. Of course, this being Lady Gaga, her outfits in the song were kept to a bare minimum. Shakira and Rihanna’s duet, can’t remember to forget you came right after. The two dance seductively, grinding, with Shakira dressed in a revealing red dress and Rihanna in a black; two hot colours in their sexy video. In the video still, the two are in black body suits and high heels, lying down, caressing each other, and in a different scene they appear to cuddle while naked.

With all that heaping bowl of nudity, Miley’s adore you was the cherry on top. God, I miss the days when she used to wear proper clothes; when her name wasn’t synonymous with nudity, twerking, and all that ugly stuff. I didn’t watch the show long enough to know what song would be played next. I’m thinking guys appreciate that stuff, but in my case, it felt too much.

The songs took me back in time, when people used to sing clothed. Growing up I loved destiny’s child. I loved how Beyoncé, Kelly and Michelle co-ordinated their outfits. And while in my teens, I enjoyed listening to Rihanna’s pon de replay and if it’s loving that you want, which were her first songs. I started losing touch when she released her good girl gone bad album, with songs like disturbia.

Lady Gaga’s the only artist from the above list I don’t remember seeing fully dressed in her music videos. After releasing let’s dance and poker face, I heard rumours that she had said she preferred being scantily dressed because her grandmother, who is partially blind, sees her better when she’s naked. I don’t know how true that is.

Then there’s the Latina goddess, Shakira. I have a huge collection of her Spanish and English songs, which I consider sexy but still decent, compared to her latest collabo with Rihanna. And Miley, where do I begin? When I first listened to the climb, I instantly fell in love with it. I watched it after watching her movie, the last song, which I didn’t find so intriguing, but the song itself reeled me in. It was/still is a very uplifting song. Who would’ve thought some years down the line she would earn herself the title, ‘the controversial singer’ because of her risqué performances?

What happened to people actually dressing up? Not in thongs, bikinis, body suits or lingerie, but actual clothes. What became of those songs one wouldn’t cringe or fight the urge to run when they’re played in the presence of one’s parents, or underage kids? It’s true that sex sells, but at this point I feel this nudity thing has been blown out of all epic proportions. Funny thing is, all these are artists I really love (d).

Sex should be an open discussion. Many parents avoid/shy away from discussing matters sex with their children, who then result to seeking the information from other sources. It’s a given thing, at some point, children get curious about sex, and eventually they try to gather all they can about this very interesting subject. Nowadays everything one needs to know about anything is just a click away, and sex isn’t an exception.

Unfortunately, children are learning about such sensitive issues from faulty sources, getting erroneous information and all. I don’t mean to bash Miley Cyrus, but right now I’m thinking any kid who watches her over sexualized videos and tries to emulate what she does will be walking down the broad road to perdition; it’s undoubtedly clear she’s not the adorable Hannah Montana every little girl idolized.

Parents ought to know by now that eventually their kids will want to know about sex and even if they bury their heads in the sand, it won’t stop them from learning about it somehow. In my opinion, it really is a very sensitive topic, but parents/guardians need to find a suitable way to address the situation.

If a parent doesn’t want their kid’s mind corrupted by the rest of the world, they should be the ones to tell them what they want them to know about sex. I, for instance, don’t remember having the ‘birds and the bees’ talk with any of my parents. In any case, once my sisters and I turned thirteen, dad started imagining we were rolling in the hay with God knows who. Funny thing is that for the better part of my teenage years to date, I remember spending most of my free time indoors; alone or with my sisters. Dad doesn’t know that. Guess he thought when the hormones started kicking in at the onset of puberty we’d be so enthusiastic, exploring and all…

I’m not even sure when I particularly learned about sex but I know ever since I started going to school I’ve always known about it. Good thing is, from whatever sources I gathered my information, I also learned it was wrong. Sex was bad. And at age nine I already knew where babies come from. Then there was that period I went to boarding school at age ten and older girls made sex seem so appealing, with some of them allegedly getting knocked up by some of the male staff during holidays. I was still learning more about it.

Based on what I’ve learned, when it comes to this delicate issue, I realized it’s all about the company a child keeps, the information they’re exposed to and the relationship one has with their parents. The parents help put it all in perspective, but if they shy away from it, then they risk having their children gather all sorts of twisted information. My parents never really delved into matters sex, but mom particularly made sure my faith in God was firm and I believe that is what got me seeing things the way I do.

Sometimes people think I’m crazy when I say sex isn’t bad, given that I’m pro-abstinence, but here’s what I always try to make clear. Sex is God’s gift to man; and married folks at that. That’s why I say it’s good. But it’s also true that when good things are done at the wrong time, then they become automatically wrong.

Still, with all the media hype surrounding sex, it’s difficult to ask hormonal kids not to practice what everyone else seems to glorify. That is why I believe parents should not just give their kids abstinence as the only option, but they should also address safe sex, in case the inevitable happens. After that they can sit back and watch, because at the end of the day, whether they have the talk or not, it will be the kids who decide if/when they will do it. But whatever the outcome, the parents will have a light conscience, knowing they imparted all the useful information to their children.

I’m thinking, what if talking about sex was as easy as parents asking their kids to cover up on a cold day so they don’t catch pneumonia…? Without fear, or anxiety… just doing it freely in order to keep them safe.