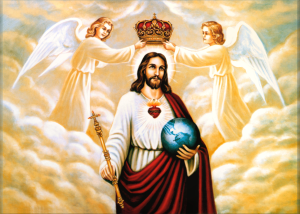 Today we were celebrating the feast of Christ The King. It marked the end of the ordinary church calendar. That means next Sunday God willing will be the first Sunday of Advent; when we start preparing for the birth of Christ. It’s still hard to believe Christmas is just days away. If you ask me, the year has flown by. Today also marked the official close of the year of faith. It might not sound appropriate that I judge myself, but I feel I’ve learnt a lot-pertaining to matters faith-this past year.

As I listened to the priest giving the homily, he gave me a lot to reflect on.

He said many people leave the church because they don’t understand the whole concept of faith. Many churches preach about prosperity, but that’s not all there is to faith. If someone tells you to run away from your problems, that is not faith. It’s cowardice. True faith is about embracing those problems we encounter, because it’s only by facing them that we find our strength.

Jesus was a king, long before He died on the cross. But He, unlike other kings wasn’t all about money and wealth. Soldiers mockingly inscribed the letters INRI on the cross, which meant ‘The king of Jews’. When He was crucified on the cross with the two thieves, the one on his right didn’t understand what Jesus represented. He mocked him, but the other one on his left understood it all. He asked Jesus to remember him when He went into His kingdom (Luke 23:35-43).

In His open arms, nailed to the cross, He embraced everyone who came to Him, without discrimination. He was-still is- the King of kings, and the Lord of lords, yet He agreed to die a shameful death, crucified on the cross, naked. He had the power to punish all those who tortured and killed Him, but instead He forgave them. He is love and kindness embodied. According to my Christian faith, those who killed him already died because this happened years ago, and I’m imagining that it was only in death that they understood that Jesus was indeed a King. His kingdom will still be in existence even when this earthly world is no more.

He conquered death, therefore giving us hope that death is not the end, but the beginning of something more beautiful. If He could conquer death, there’s nothing else that He can’t. Bearing this in mind, we should take our fears to Him; entrust Him with our lives. He can help us conquer even the most impossible of issues. Some people have been debilitated by their own fears. They live each day, afraid that someone they are at odds with could annihilate them.

I know it sounds cliché, but Jesus Christ is the answer. It’s all about believing that He can help us overcome even the greatest obstacle. And the good thing is, when one entrusts his/her life to Him, He never fails them. He didn’t promise we wouldn’t have crosses to carry, but He did promise to help us carry them. Suffering is an integral part of a Christian’s life; however, the suffering isn’t meant to destroy us, but to strengthen us.

When concluding his homily the priest asked, “Is Christ the King of your heart? If not, why isn’t He?”

“My son, perform your tasks in meekness, then you will be loved more than a giver of gifts. The greater you are, the more you must humble yourself. So you will find favour with God. There are many who are noble and renowned, but it’s only to the humble that He reveals His mysteries. For great is the might of the Lord; he is glorified by the humble. The affliction of the proud has no healing, for a plant of wickedness has taken root in them, though it will not be perceived. The mind of the wise man will ponder the words of the wise, and an attentive ear is the wise man’s desire.” (Sirach 3:17-20, 28-29).

This bible verses emphasize on the need to be humble. Jesus is the widely acclaimed King of Kings, yet He mingled with thieves, wasn’t afraid to interact with people who had been shunned by their communities, e.g. those suffering from Leprosy as it was a highly contagious disease… I wouldn’t be able to exploit the endless list of things He did, which most people wouldn’t do if they wielded so much power.

In today’s setting, power and fame are associated with cruelty, greed, misuse of power…all the vices one can think of. As Christians, we are called to look up to The Man of Sorrows. He washed His disciples’ feet, when they should have been washing His. He did that to set an example; that the master should treat his subjects with humility; that he should serve them.

Sometimes in life, we find ourselves in situations we wouldn’t want to be in, but those are some of the moments life gives us to be able to reflect on the essence of humanity. When we fail to learn from them, we sink even deeper into the abyss. It is said, that when one finds themselves on their knees-when life feels impossible; when it knocks them down- one is in the best position to pray.

Humility is a virtue which should be practiced by everyone, irrespective of the title one holds. I often wonder, why is it that people who lead/led saintly lives like Mother Teresa, are people from humble backgrounds? Does it mean that it’s impossible for one to be powerful/rich and still practice humility?

I realized people have grown accustomed to seeing leaders/celebrities act with so much derision, so that when one of them does something noble it’s regarded with suspicion. Is it seriously that hard for one to wield so much power and still treat others like fellow human beings? Without discrimination or scorn? Jesus had the power to give life; He is the life, but that never made Him arrogant.

Christ teaches us to serve those under us; to serve others, without expecting anything in return, because then we earn God’s favour, which is greater than anything on earth.

In Matthew 5: 5, when Jesus was giving the sermon on the mountain, where He gave the beatitudes, He said, “Happy are those who are humble; they will receive what God has promised.” This just shows how much God Values humility.