“My husband might be cheating on me,” a lady cries.

“Have you talked about it with him?” A concerned friend asks.

“No, I heard it on the grapevine. And I think it’s true,” the aggrieved wife replies.

“I think my thirteen year old daughter is having sex,” another woman tells her friend.

“Why do you say that? The friend asks.

“Because the other day she left her purse in the car and as I picked it up condoms fell out.”

“Have you asked her about it?” The friend argues. “Maybe they’re not hers.”

“I don’t know. Maybe,” the woman replies, clearly stressed out.

There are just so many scenarios I could think of where people are not happy because so many things-the important ones especially-go unsaid. Sometimes there are misunderstandings between me and my sisters, who I consider my confidants, and at times I see my parents arguing only because they haven’t discussed some seemingly petty issues, which when left unaddressed morph into gargantuan problems.

For relationships to thrive, there must be tonnes of trust, and communication should be as vital as breathing. I’m not a shrink, but I feel those are the two ingredients for a successful relationship. In my opinion, there can’t be love without trust, and without proper communication there can be no trust. Even two people in love could break up for the most trivial of issues, just because they didn’t talk it out.

There’s this Indian drama that has me so captivated. I’m not so sure why I watch it; I can’t even say it’s the plot I like because I always feel it has so many loopholes, but at the same time, I just can’t stop watching it…I guess it’s my sheer curiosity to see how things turn out. It revolves around themes like love and trust-which in my opinion is usually misplaced; deception, betrayal, revenge… One of the main protagonists found herself separated from her husband because a few issues went misunderstood. Aggrieved, she went to seek her platonic childhood friend’s advice. Oblivious to her and her husband, who was now best buddies with this friend, was the fact that it was this same friend who had created the rift between them as he wanted the woman all for himself. In his defence, he had loved the woman since they were kids and couldn’t bear seeing her sharing her life with another man other than him.

The friend asked one of his minions to pretend he and the wife had an affair and somehow it worked out so perfectly. They made it so convincing that the wife was indeed cheating on her husband. The plan was to make the husband suspicious of his wife so he would get so infuriated and subsequently break up with her. The plan worked out perfectly. Within no time the wife had left her palatial home and moved back to her parent’s house.

The platonic friend would meet up with the wife, trying to convince her why it was in her best interest to divorce her husband, and later he would advise the husband to do the same. The husband, who was convinced his wife was cheating on him, didn’t want anything to do with his her; he wouldn’t pick her calls. The small misunderstanding graduated into a big mess, only because they wouldn’t sit down and discuss it civilly.

As I watched them I couldn’t help thinking, can’t they just get over their anger and pride and talk it out? I just got so bugged; I decided I wouldn’t watch it again. Unfortunately I-like many humans-am weak; I couldn’t resist watching it the next time day. Eventually, the minion confessed everything to the couple after realizing they didn’t deserve such cruelty from someone who masqueraded as a friend, when he was the principle cause of their woes.

Sometimes when we’re hurt or angry we refuse to see beyond what lies in front of us. The conflicting emotions make us myopic; sometimes it’s just pride hindering us from confronting those we’re at loggerheads with. We refuse to seek the truth. When we ignore communication, that’s when everything spirals out of control and sometimes the situation becomes irreparable.

Before you believe your partner is cheating on you, talk. Before you presume to judge your child is out there doing God-knows what, talk. In my opinion, situations feel unbearable because we refuse to communicate. Slowly, from my experiences and other people’s, I’m learning that if people communicate enough, many relationships will be saved from collapsing.

A few days ago I watched my two sisters arguing. My big sister, who’s an aspiring fashion designer, makes clothes for me and my little sister when she’s not too busy with school; currently we’re her muses. We had a cultural event in our church and one of the requirements was to go dressed in some cultural outfit. They only announced it a week to the actual day so we only had a few days to find suitable outfits.

I already knew what I wanted; we bought the fabric and in four days mine was complete. My baby sister however, couldn’t decide what she wanted. It was difficult trying to choose a design that would be ready in only two days. While sampling a few designs, it just so happened that she and my big sister couldn’t agree on one.

That little, seemingly minute conversation spiraled out of control and before long, one was hurt, the other one was furious. I was caught in the middle, trying to help them come to a consensus. By the time we went to bed that night they were not talking to each other.

That argument reminded me of previous fights between mom and dad. That’s how it’s always been between them; going to bed with matters unresolved. When they wake up the next day they try to ‘ignore’ what happened-depending on the magnitude of their fight. The small issues are deftly swept under the carpet. They just go about with their lives like nothing happened, until the same issue springs up later in another argument, seeming much more intense than before.

When we were small, my big siz took on the role of chief mediator. When mom and dad weren’t talking because they just couldn’t see things from the same perspective, she would ask us to jointly intervene. I didn’t have the patience for it but since she had requested, I would agree to it. We would sit both of them down at different times, trying to understand why they had fought.

On most occasions we would talk to dad when he was sober, so it wasn’t that bad; it actually felt like a breakthrough because sometimes he helped us understand why he had lashed out at mom. Apparently he wasn’t always the guilty one.

After getting dad’s side of the story, we would wait for mom to come home from work then we would get her side of it. We would then help them see it from the other’s perspective; when all was said and done, they would be hugging and kissing, happy to be on speaking terms again.

Those days were such happy days for us; it’s every kid’s dream to see their parents happy; we were no exception. That’s how I got to understand that communication is key. People could fight over the most trivial of issues because somehow a point went misunderstood, then got blown out of proportion. In an attempt to reconcile, sometimes we choose to sweep the issues under the carpet, but I realized that is hardly a solution because eventually the same issue will graduate into something dreadful, which could have been avoided in the first place. 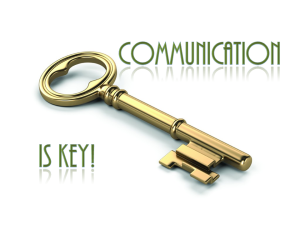 About our outfits, I had a talk with each one of my sisters separately, and just like we used to do with mom and dad, I helped them understand what the other meant. My big sister tried to make a dress similar to the one our baby siz wanted, but tried to simplify the complicated parts so she could finish making it on time. When Sunday came, we went to church happy in our beautiful custom made outfits.