It takes one tonnes and tonnes of strength for their faith, and willpower not to be swayed easily by difficult situations… and I’m speaking from experience. I think on average, the state of affairs in my life is one that is almost-always depressing. It has become a habit for me to talk myself out of stressful thoughts that by now would have had me falling into an abyss of clinical depression.

Occasionally, on days when I’m just trying to be honest with myself (my faith in God aside), I’ll internally admit that this life is hard; really, really hard. However, since my mom and two sisters are more pessimistic than they are optimistic, I try to remain positive for their sake at least, so that when worry sets in, we won’t all drown in it.

Comfortingly, even with all our seemingly incessant problems, God has showed me that He really listens when I call; so I’ve learned not to rush Him. He does take His time sometimes but when He ‘arrives’, He does it in style; so the wait is always worth it. That thought is what keeps me motivated. I kinda equate this feeling to when a teenager requests his parents to buy him a car on his 16th birthday. He waits anxiously, only to be disappointed when he receives some relatively cheap gift instead.

His 17th birthday comes and goes, and there’s no car still. So he gets very desperate and reminds his parents that all he wanted was ‘just a car’. Something he can drive to college in… He gets more frustrated because he’s wondering how come his parents haven’t noticed all the kids his age already own cars…

When he realizes the car might not be coming from his parents ever, he even stops asking for it; and it even gets more exasperating when his parents fail to offer any explanations for not granting the request. On his 18th birthday however, something totally amazing happens…

Naturally, because of the crashed expectations over the months, he’s not even eager to get out of bed because he already realized the car he really wanted would be purchased with his own hard-earned cash in the future; furthermore, his friends and neighbours already teased him for not being able to afford a car, and the ‘joke’ got so old that they found something else to laugh about.

When he finally gets out of bed sulking and generally unexcited about turning a year older, he makes his way to the dining to have breakfast with the rest of the family. At that point, he’s feeling so lethargic that nothing, in his imagination, would be grand enough to wipe the gloom away.

Surprisingly, when he’s pulling up a seat, something odd occurs to him. It’s already bad enough that he never got his car, which from his own estimation, his parents could have afforded if they willed it; now on his 18th birthday, no one even seems to remember it’s his special day. At the table, everyone’s demeanour bespeaks of another humdrum day in the family’s life.

Even the younger siblings who are always regarding him with so much adoration barely recognise his presence. Things just got worse in a span of two years, he thinks; from relatively cheap gifts to no gifts at all. Suddenly the gift voucher given to him a few birthdays ago feels like an awesome gift.

However, when they are about to pray for breakfast, the mother announces that she was unable to have breakfast ready on time and she has a meeting so everyone will have to fix their own breakfast. At that point, the teenager wants to punch something… even getting breakfast on his birthday is now a problem. Infuriated, he pushes his seat back and when he’s about to exit the room, his dad calls out, “Hey, you forgot something”.

Internally, he feels like a volcano that’s just about to erupt. Nonetheless, looking over his back, he asks calmly, “What?” He masks his disappointment behind a half smile.

His dad only holds out the key in his hand, and the teenager kinda looks confused momentarily. He can see that is definitely a car key, but he’s wondering if that’s a hint for him to rush to the store to get a few ingredients for breakfast. Then to his surprise, the entire family says cheerfully, “Happy Birthday!” And suddenly, as realization dawns on him, he walks towards the dad and takes the car key.

“You didn’t think we forgot your birthday, did you?” The mom asks, smiling because she already noticed her son had thought they did. When he rushes outside, he can hardly believe his eyes. He only asked for ‘just a car’, but parked outside, is a sleek Lamborghini, and it’s all his. He even feels guilty for getting mad at his parents for not buying him a car. 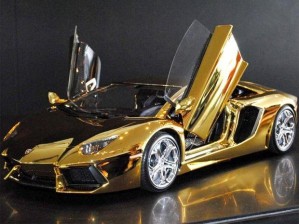 “We didn’t want to get you just a car,” the dad says. “You are our son and we love you so much, so we wanted to get you a quality car. And we knew this is what you’ve always wanted, even though you never asked for it expressly.”

“I thought you didn’t think I was ready to have my own car”, he confesses, awash with guilt.

“We couldn’t afford it at first so we realised we would have to save up some more for it,” the mom offers. And it all suddenly makes sense to him. When the air has been cleared about delayed gifts, the mom tells them she made a breakfast reservation in a five-star hotel. The day that had seemed so dull takes a 180-degrees turn and everything feels like a scene from a fantasy movie.

That is how I see the relationship we have with God. He might take long to answer but when He does, He ‘arrives in style’. So unlike the impatient teenager, we need to wait patiently… and to trust God.