Mutilation is a word used commonly to describe girl’s circumcision. Most of us call it Female Genital Mutilation. In a recent jurisprudence class, the lecturer posed some questions to the class, “Was the word mutilation used properly to describe the procedure? Isn’t it extreme? How does one approach the topic objectively, if the term itself is already subjective?” He made it clear that naturally he is opposed to the whole idea of female circumcision, so he wasn’t trying to defend it in any way and that his was just a general question.

However, he pointed out that in his opinion, the instant reference to the procedure as mutilation makes one subjective so one doesn’t look at it with an open mind. Unable to hold my opinion back, I told him I felt the word was used properly. Because, how can one begin to describe positively what is actually done to girls in the name of circumcision? Based on the limited knowledge I have of what usually happens, I would say using a word other than ‘Female genital mutilation’, would be sugar coating it.

For starters, how does one justify the pain girls from various cultures are subjected to when their genitalia, the clitoris to be precise is ‘tampered with’, for purely non-medical reasons? In some cases there’s removal of the clitoral hood and clitoral glans, removal of the inner and outer labia and closure of the vulva. In the latter process, also referred to as infibulation, only a small hole is left for the passage of urine and menstrual fluid. Later the vagina is opened further for intercourse and child birth.

Just from reading that basic definition, what part of it doesn’t sound like mutilation? Personally, I think it’s excruciatingly painful and the worst part is that it’s said to be done solely to control a woman’s sexuality. That reminds me of a related practice I came across, known as Chinese foot-binding. Both of these practices are done for the man’s benefit, yet they’re agonizing on the woman’s part. 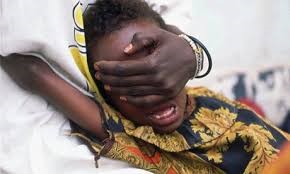 The clitoris as it is, plays an integral part in a woman’s enjoyment of sex. That fact alone makes me wonder what happens when a woman loses part of, or all of it. I have tried understanding why older women in cultures where this is practiced encourage it; growing up, they were taught it’s a source of honour for the girl, so in the event one refuses to undergo the same, they lose their social standing. I know I would hate to be ‘ostracised’ by my own people so to some extent I understand them.

This however, doesn’t justify this procedure, which I personally consider very unnecessary and demeaning to a woman. I have read of stories where circumcised women have had trouble being in intimate relations with men from cultures different from theirs, as those men consider the whole issue of female circumcision an impediment to fulfilling whatever sexual fantasies they may have, especially where the woman is ‘unresponsive’.

In light of this, wouldn’t referring to this practice as anything other than mutilation be sugar coating it? I’m of the opinion that the term ‘mutilation’, extreme as it sounds is just, as the old adage goes, ‘calling a spade a spade’.

After my brief debate with the lecturer, he asked what the difference was between FGM and nip/tuck (cosmetic surgery), where a woman goes through what others might term, ‘unnecessary pain’ just so they can look beautiful. Personally I had more than enough reasons why those two types of procedures couldn’t be put on the same scale.

For instance, in FGM consent is usually not sought but in most cases at least, a woman chooses whether they want their boobs enlarged, etc. Additionally, during cosmetic surgery a person is sedated where the procedure could be painful. With FGM, however, the procedure is carried out by non-medical practitioners and there’s no anaesthesia used, so a girl/woman is conscious the entire time, and this is taking into consideration that very crude tools are used, say shards of glasses. Furthermore, one knife/razor could be used on very many girls without sterilizing it.

In some cases, girls die from over bleeding during the circumcision, and others contract recurrent infections and/or develop complications later in life, which in some cases lead to death. Simply put, there are no known health benefits of FGM.

I, therefore, find the two procedures different and shouldn’t be compared. In other words, I wouldn’t think of cosmetic surgery as a form of mutilation because in essence, that is used to enhance a person’s physical beauty. FGM on the other hand has even been outlawed in many countries because of the serious health risks it carries, and for the simple fact that it’s demeaning to women.

A lady in my class said she felt the term mutilation was used inaccurately in an attempt to scare people off from the practice. The lecturer added that words usually impact how we view different things and that I agree with. Still, I felt describing the practice as mutilation was apt, since that’s what it is anyway. That’s just the way I see it anyway.

What do you think? Can cosmetic surgery be referred to as mutilation? And is the word Female Genital mutilation used subjectively to instil some sought of fear in people, or it’s a perfect definition of the practice?