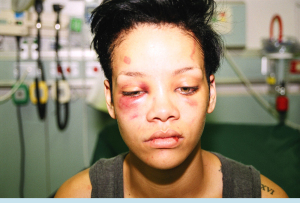 Is there any woman out there who gets battered by her husband/partner and is under the impression the reason he does it is because he loves her? The other day I was listening to this very odd conversation on the radio, where some women were contentedly saying that they do get beaten by their husbands because they love them; what’s more, they said they would totally freak out if their husbands stopped battering them because that would mean they don’t love them anymore and are cheating on them.

I’m not really a relationship guru but isn’t it the other way round? In my opinion, a man doesn’t beat the woman he loves; in any case, he will start beating the one he has when he finds another one who he desires to please and finds his wife/partner a hindrance.

I’m not saying this because I’m married, but because I’ve seen dad act violently towards mom and there is no part of me that’s convinced he did it because of all the love he has in his heart for her. I have never had any evidence of dad cheating on mom, but I remember when I was a kid, some women who were mom’s friends at the time kept telling her the reason he stayed out so late was because he was seeing other women.

I can’t say if it was true or false, but I remember the time those rumours were going round, was when he was so violent. It couldn’t have been a coincidence. From my own understanding of love, one doesn’t hurt a person they love.

We interpret different actions differently, but one thing I have difficulty wrapping my head around is the idea of being beaten by a guy as a sign of love. As a result of the domestic violence I’ve witnessed in my family, I feel I would walk out of a relationship the instant I sense the guy I’m with has violent tendencies.

What people need to understand is the fact that domestic violence (because that is what it is) doesn’t just affect the parents but the children too. A woman might interpret battering as a sign of love but the children interpret it pretty badly.

Once, my aunt told mom, she was so furious with my cousin and as a result she slapped her hard. My cousin’s daughter, who was watching got so annoyed and started hitting her-my aunt-with her tiny flip-flop, asking her to stop hurting her mom.

From the way I understood it, my cousin, who lives in her mom’s house together with her daughter had been coming home late when everyone else was asleep. Her mom tried talking to her about it before, but apparently she wouldn’t listen.

Furious that my cousin wasn’t behaving right, my aunt slapped her. From that, one would reason she was doing what was right for both her daughter and her granddaughter. The four year old girl however, felt her mom was being hurt and went to defend her.

My aunt justifiably did that for love, but did the little girl interpret it as love? That is the same way I feel about men beating their wives. Maybe they feel they have all the reasons in the world to do it, but I don’t interpret it that way. When a man decides to hit a woman, it never comes out as love; at least not to me. And I believe any man who truly loves his wife would totally back me up on this one.

Hitting doesn’t signify love. It’s just one way of demeaning women. The way I see it, under no circumstances should a woman feel her man hit her because he loves her. It just doesn’t make sense.

Lately when I go to get my hair done, there’s this lady I see. She’s a beautiful woman, who runs her own salon nearby. Everytime I see her she’s always in dark sunglasses, even when it’s not sunny. Last Sunday though, I saw her without them on and she had a huge black eye. Based on what I heard from some chatty hairdressers, she was beaten by her husband. No one can convince me that was love.

How does a man who claims to love his woman give her a black eye? An evident sign of battering. This is just one example of battered women; I have atleast a dozen of them, and none of them convinces me wife battering is a sign of love.

If battering was a sign of love, why would victims try to conceal scars under layers of makeup, with some saying they fell in the shower or they ran into a door…etc.? Last I checked, when a woman receives flowers from a guy she loves, she proudly shows them off to friends.

Is there any woman who would honestly want to walk around with a bruised face, or scars hidden under layers of clothing, knowing that her man did that to her? Bruises on a woman’s body only bespeak violence. All I’m saying is; no form of battering should be considered acceptable.