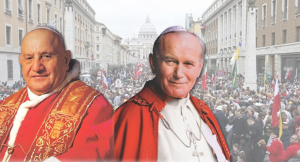 Yesterday one of the most memorable events in history took place. Two living popes: Pope Emeritus Benedict XVI and the incumbent Pope Francis celebrated the canonization mass of two of their predecessors, Popes John XXIII and John Paul II as they were declared saints. Pope Francis said the two men had led exemplary lives during the 20th century.

In his own words, the two Popes, now saints, were priests, bishops and popes of the 20th century. They lived through the tragic events of that century but they were not overwhelmed by them. The event held at the St. Peter’s Square was witnessed by hundreds of thousands of pilgrims from all walks of life. “For them, God was more powerful,” he said.

I wouldn’t really know much about their particular reigns, as I wasn’t born yet when Pope John XXIII was in office and for the better part of the papal reign of John Paul II I was still small; however, the things I heard about the latter gave me the impression he was very holy. I always had the impression that the world would end the day he died. I feared my worst fears would be confirmed when he died in 2005, but other than the unique burial, everything was just normal.

I remember watching him on TV; he carried himself with so much grace and everything about him screamed ‘holy’. I don’t laugh at myself for thinking he was God incarnate. Pope John XXIII on the other hand is credited for helping bring to end official catholic prejudice against Jews and his pacifying role during the cold war, among other things.

This grand, historic event reminded me of a reflection in my prayer book:

Why were the saints, saints?

Cheerful, when it was difficult to be cheerful;

Patient, when it was difficult to be patient; they pushed on when they wanted to stand still;

Kept silence, when they wanted to talk;

Were agreeable, when they wanted to be disagreeable.

That was all; it was quite simple, and always will be.

Is being a saint really that easy? As much as I try to walk in the footsteps of Christ, I find trouble trying to be happy when I should be pissed; remaining silent when someone needs to get a piece of my mind… My honest opinion is, it’s not easy being a saint.

The canonization of the two pontiffs had me thinking about Beyoncé being viewed as a deity by some of her fans. I don’t mean to compare her to the pontiffs or Jesus, for that matter; I’m just trying to find sense in a rather bizarre issue. Has the singer lived such an exemplary life as to be called a god? 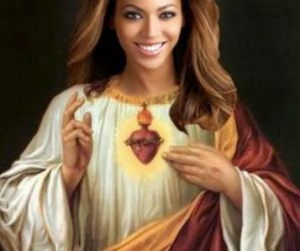 I’m assuming everyone has heard of Mother Teresa of Calcutta? As noble as she was, serving people selflessly, she was never regarded a deity. She was only considered a humble servant of God; and instead of calling her goddess, we pray for her. I’m not too sure I know all that’s involved in the process of beatifying someone but one thing I’m sure of is that there’s intense praying involved.

And Mandela? Remember him? The man who fought for South Africa’s independence and became the country’s first black president in 1994? He was loved by many. When he died last year, the whole world mourned the loss of a great hero. Leaders from all over the world sent their condolences and many of them attended his funeral.

While he was still alive, he wasn’t oblivious to the fact that people adored him. But, to all those who thought he was a saint, he said, “I am not a saint. Unless you think of a saint as a sinner who keeps on trying.” I thought that was so noble of him; nowadays humans die to get titles, most of which they haven’t earned.

Beyoncé, for instance; she has done a great job as an artist, but does that qualify her to be called ‘the almighty?” Great men like Martin Luther King Jr., Nelson Mandela and other people who have played remarkable roles in the making of history were never regarded as deities. They lived for others, even died for them, but haven’t been called gods.

It’s from this that I find the whole idea of beyism (Beyoncé-ism) totally irrelevant, and discernibly iniquitous. The basic characteristics of a leader are:

-One must be intellectual.

– One must be prepared to suffer.

-One must know how to forgive those who wrong them.

These celebrities we adore so much; can any one of them die for their fans? Would Beyoncé suffer even for those who now call her goddess? I’m just thinking people have weird ways of showing their love for their idols. Toby Sheldon is one of these crazy fans. He has spent over $100,000 in attempt to look like his idol, Justin Bieber.

I don’t mind people going out of their way to show their love, problem is how they do it. I only hope someone sane out there will help drive some sense into all those who claim Beyoncé is their goddess; those, who now profess beyism.

4 thoughts on “Of sainthood and beyism”