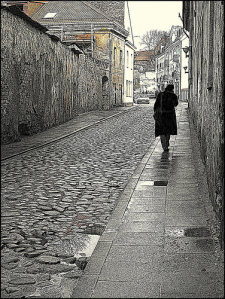 Some people feel they don’t fit in the society for various reasons; because they can’t seem to fit completely in one particular group; always teetering on the borders. For instance, there are those born in mixed race families, so they end up feeling like misfits; hermits of some sought because they can’t identify with one side entirely; because they are too white to be black and too black to be white.

I can only relate to that only too well, but for an entirely different reason; that is how my extended family makes me feel; like a misfit. As I’ve mentioned in two previous stories: the only good thing my granma ever did, and family get-togethers, my father’s family is considered affluent, and my mom’s on the other side happens to be a relatively humble one.

Based on this, my paternal relatives find us too poor to mingle with, and my maternal relatives deem us too rich to be considered a part of them. Social quandary! I attribute the latter to unadulterated ignorance…

I always feel unlucky when I think about my relatives because seldom do they give me something good to relish. Sometimes I feel that maybe I’m too critical, then again I realize if it were so, I would be smoldering with unalloyed odium. They work me up with rage effortlessly.

Last year my mom spent the better part of her account’s contents funding the construction of her mom’s house. She was accomplishing one of her childhood dreams; to build her mom a decent house. With the help of one of her older sisters, she found an architect who would head the construction. They agreed that since my mom couldn’t travel regularly to ‘keep tabs’, her sister would do it. If the architect needed anything, my aunt would cater to it.

It was smooth sailing at first…the architect faithfully kept my mom informed, but then things started to go awry; her two brothers, who live on the same compound, started putting up blockades, taking my mom two steps back with each one she took. Somehow, they had assumed my mom was trying to grab a piece of land indirectly; so she could claim the house when granma dies.

What? I couldn’t hide my astonishment as I heard the reason for their callous actions.

While the construction was underway, my mom would receive calls while at work, that one of her brothers had sent someone to demolish the house; once, my cousin-one of my uncles’ firstborn son- was incarcerated for similar charges. He had knocked down part of the brick wall. The police in-charge of the case called to ask my mom if she was willing to press charges but as it turned out, my cousin admitted he was remorseful, so my mom asked that he be released.

When my mom called to tell me what was happening, the first thought that came to mind was a phrase I’d read earlier, ‘someone shook my family tree and a few nuts fell off’. I simply couldn’t comprehend why someone would do that to their own blood. They were making her incur costs she had not budgeted for.

I bet he–my cousin-was indeed contrite because after that unprecedented brush with the law, he willingly offered to be my mom’s personal informant. He didn’t mind if it was his dad he was ratting out; he would just keep my mom posted.

After lots of unnecessary squabble, the house was ready for my grams to move in by Christmas. She was elated. Seeing her mom so happy helped my mom a lot; it made her feel that all the trouble she had encountered was all worth it. My mom made it evidently clear that she wasn’t laying any claims to the house; it was theirs to do with as they pleased…she wasn’t interested in the land either…

Shortly after the Christmas festivities, my mom’s younger brother, who is a subsistence farmer, rung her, to inform her he’d enrolled his eldest son into an expensive private school. My mom was perplexed, “How do you intend to pay for it?” she asked him.

Flagrantly, he told her he was hoping she would pay eighty percent of the total fee each year for the next four years. “What?” My mom couldn’t believe her ears. Her brother went on to tell her how he was hoping that since she had offered to build their mother a house, she could also afford him that little favour. The word ‘opportunist’ came to me in flashing neon lights.

I hated myself for entertaining such distasteful thoughts, but he wasn’t giving me much to work with…

I could only see faults with that arrangement; firstly, he had enrolled his son without making prior arrangements with my mom, who he expected would be the major ‘benefactor’. Secondly, he was taking advantage of her benevolence. Who does that? She had barely recovered the money she had spent on the construction…

She was distraught; if she told him she couldn’t, he would assume she was just being parsimonious … “He clearly doesn’t have your best interests at heart,” I comforted her. “If he did, he would have had the courtesy to atleast consult you before embarking on this issue”. It was the best I could come up with at the moment.

There was just malice written all over it; he was one of those trying to bring the house down when it was under construction, and I even remembered a few outrageous expletives he had hurled at her when she asked him why he was erecting roadblocks, and now this? I couldn’t help but feel he was scorning her.

With so much difficulty, my mom mastered the courage to tell him she couldn’t fulfill his request. He was none-too-pleased about it.

It is things such as this that make me feel lost…what exactly should one do to be at peace with both spheres? For one to not feel like their hanging on to the edges of two different worlds? Lazily, my curiosity piqued, I often find myself wondering if all families are as screwed up as mine… then like an answer to my own question, I remember, I have met some really happy functional ones…