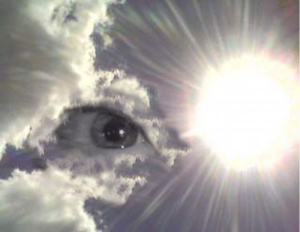 Do you have those moments that you find yourself doing/saying something but when you look into the past you can’t quite recall where you learnt/heard it?

I have this story etched at the back of my mind; I’ve retold it severally, on many occasions…

When I try hard to remember where I got that story, I think I read it, only I’m not too sure where: God has three principal characteristics:-

He is Omniscient- I relate this to science; He knows everything.

He is Omnipresent-I relate this to presence; He is everywhere.

He is Omnipotent- I relate this to power; He is all powerful.

This basically means that we can’t outwit Him, we can’t outrun Him, and neither can we overpower Him.

As a kid I had my own fair share of inadequacies. Lying was my prime flaw. It was nothing major really, just those little lies kids tell to get out of snags. Most of the times I lied, I was trying to escape my mom’s wrath, whenever I erred. I already mentioned she was the quintessence of stringency.

Once, when I was nine, my mom was boiling water on the stove. I don’t know what it was for, but as she lay there on the couch, she asked me to cover it up. That wasn’t difficult, I took a plastic lid from the cabinet and covered it up, and I left it to boil.

A while later I went to check if the water was hot. My heart almost burst out of my chest when I walked into the kitchen; the green lid was slightly bigger than the saucepan’s rim; the flames had melted one part that had been protruding.

How was I going to tell my mom I burnt a lid? I panicked. I just took the lid and threw it in the furthest corner of the cabinet, hiding it behind some dishes. Feigning composure, I told my mom the water was ready. I deliberately omitted the part where I burnt the lid; I was afraid she was going to find out what I had done, but to my relief she didn’t. At the time our house helps had left recently and I was sure she would know I was the culprit if she found it. I only crossed my fingers, hoping…

My heart would always skip beats whenever I heard my mom in the kitchen. Eventually she found it, but after a very long time; it was a chilly Sunday morning, she was making breakfast while we were preparing for church. She was in a hurry, so she didn’t dwell much on it…she just wondered why it wasn’t thrown away and she tossed it in the bin…

Sometimes, my mom often took our backpacks just  to rummage through; to check if we were in possession of items that didn’t belong to us and if we had all the books they-she and my dad-bought us at the beginning of the term.

We didn’t know when she would conduct her search, so we had to have our things in order. If one lost a book or any writing paraphernalia, we made sure to tell her before she found out. Most of the time she would find everything in place, but a few things would afford us an intense scolding. For instance, she always ensured we had pencil sharpeners; she didn’t want us sharing razor blades with other kids, because she deemed it unsafe. Diseases could be easily transmitted through sharing of such sharp objects.

The forbidden fruit has invariably been sweeter; I found razors appealing. I preferred them to boring sharpeners, just for the simple fact that I didn’t have them. During the searches, my mom would find pieces of broken razors in my pencil pouch, and she would be all the rage… she would reprimand me so harshly, that I would be afraid of using them, even in her absence, lest someone from my class snitched on me.

That was the life I lived, playing when the cat was away; engaging in mischief when my mom wasn’t around.

I don’t know how old I was, but I know I was young because since then my life changed remarkably, when I learnt of a story; the story of a young man who had stolen from his family. He, just like me, was afraid of being reproached by his family, so he went to hide.

The young man walked into a dark cave, because he knew no one would find him there, and he was comfortable; but in the eerie silence, his inner voice reminded him that someone was actually watching him; God was watching; the cave was extremely dark, but not dark enough to hide him from God.

On that realization, he scurried out, in search of a better hide out. He settled for a small space underneath a massive rock. It was all solid, God couldn’t see him there…then that disturbing thought crept in his mind; God was still watching.

Afraid, he crept out hastily from underneath the rock scampering for a better hide out. His feet led him to the ocean. He took a plunge into the vast waters… but while in there, he figured the ocean wasn’t deep enough to hide him from God. He was still watching. He swam back to shore… there wasn’t a place he could hide; God was everywhere, He could see it all, even his secret thoughts. God had seen what he had done… and it’s His opinion that mattered.

As he sat there, he realized that it wasn’t his family’s wrath he should fear, but God’s. The lad made a resolve; he was going to ask for his family’s forgiveness…

That story changed my life…in my juvenile mischief I would remember, “God is watching”… and that would instantly halt me in my steps. The story taught me that it wasn’t my parents I should fear, but God, who sees it all.

So even when the sugar bowl was sitted idly on the table, tempting me to take a spoonful, the thought that God was watching would stop me…

I didn’t turn out perfect…actually far from it; I question some of the choices I’ve made so far… but I know one thing for sure, had I not learnt of that story, chances are I would have turned out worse. I stopped being afraid of my mom; if I made any choices with my mom in mind, it wasn’t because I was afraid of her retribution, but because I didn’t want whatever choices I made to hurt her, because I respected and loved her.

Ever since, I learnt to look at things from an entirely different perspective; I was afraid of God-in a reverential way; what He thought of me was all that mattered…till date, that has been my guiding precept.